There has been a lot written recently about being brave. And, because I have never considered myself brave, I have had to do some rethinking about it all.

A number of things used to pop into my mind when I heard the word brave. Like fighting on the front lines of war. Or jumping out of an airplane. Or becoming a human shield in a dangerous situation. Brave always felt big. Few would argue its value as a virtue. I have never considered myself to have those tendencies. I have never wanted to jump out of a plane and sometimes wonder if I wouldn’t be one to run for cover in a dangerous situation.

But I have had to rethink that word lately. The word implies courage and enduring some measure of pain or danger. Who hasn’t done that? Just because I never (ever) want to go skydiving doesn’t mean I am not brave. It’s just that we have reserved that word for big moments that get attention. But those small moments that no one sees warrant the use of that word as well. There are brave men and women on the front lines everyday.

I can remember when our oldest son was only months old and was labeled “failure to thrive.” He was not eating and we asked about having a feeding tube put in. The doctor said there wasn’t much sense putting a tube in if “he wasn’t going to be any good.” Yes. He said those words. If he winds up living, he said, he wouldn’t ever walk or talk. Go home and think about all that. Talk about dark night. The next day, our physical therapist came to see him and asked what was wrong. We explained what the doctor had said. “That boy has too many skills to come to that conclusion.” Her words gave us hope. And we got a different doctor and we fought for our son. Kind of like on the front lines. In a battle. 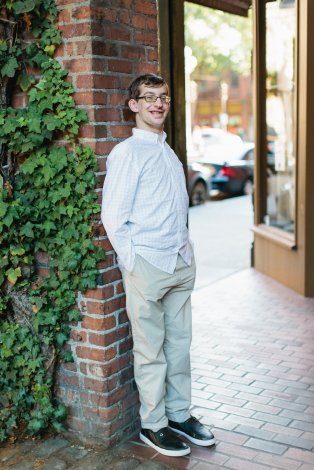 So many challenging days between that moment and today. But I think brave looks like believing when the odds are against you. Which may look like believing for your child with special needs that can’t even be quantified. Or loving a spouse when you are not even speaking. Or staying in the battle with a child who has chosen to disobey for the zillionth time. Or celebrating a friend’s pregnancy when your test came back negative, again. Or with the washing machine that refuses to keep up with the piles. Or with the day that is too short for what needs to be done and sometimes too long to get through with your sanity. Or fill in the blank with what we all face from day to day.

Suddenly, jumping out of an airplane seems an easier proof of brave.