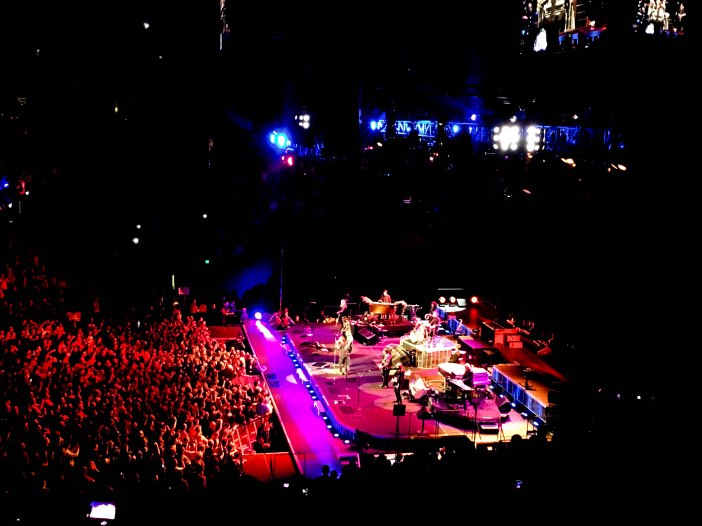 You wanna know what it’s like to be a giver? An all-out, hold nothing back, pour out everything you got kind of giver? Go see The Boss.

He has played over 2800 shows for more than 30 years. And he gives as much today as he did when he was just getting started. Maybe even more.

Springsteen is a song writer, a story teller, an anthem maker. His music has resonated with so many because he has been chronicling the sound of a generation. But also because the themes he writes about are more universal than that. “Born to Run,” the song that put him on the charts, was about being young and untethered and running after a dream. But it’s not only about being young.

“It was a record of enormous longing, tremendous losing–that never leaves you. You’re dead when that leaves you…” It’s about taking the next step and not knowing what tomorrow holds. “And so the song continues to speak to that part of you–it transcends your age and continues to speak to that part of you that is both exhilarated and frightened about what tomorrow brings. It’ll always do that, that’s how it was built.”

He obviously sees the songs differently today then when he wrote them.  When he wrote “Independence Day,” it was about unresolved issues with his father. Today he sees the song about adult compromise, something he didn’t understand when he wrote it. But the raw emotion of two people realizing they can no longer maintain their relationship applies to more than just father and son. And the line, “Soon everything we’ve known will just be swept away”  applies to…everything. It’s heart wrenching, and one of my favorite songs.

In an interview with Rolling Stone magazine, he was asked how he keeps his show fresh considering all the dates and for all the hours he plays. He said, “It’s a matter of: Are you there at the moment? Are you living it?”

Being present, living it in the moment, giving it everything you have. Those are some things I took away from the Boss last week at Key Arena. This proud-to-be-from-Jersey girl left feeling inspired. And wanting to do all those just a little more. Thank you, Bruce Springsteen, for not just singing songs. But for releasing anthems that remind us of the ties that continue to bind. You did something good that night.

3 thoughts on “Something Good”